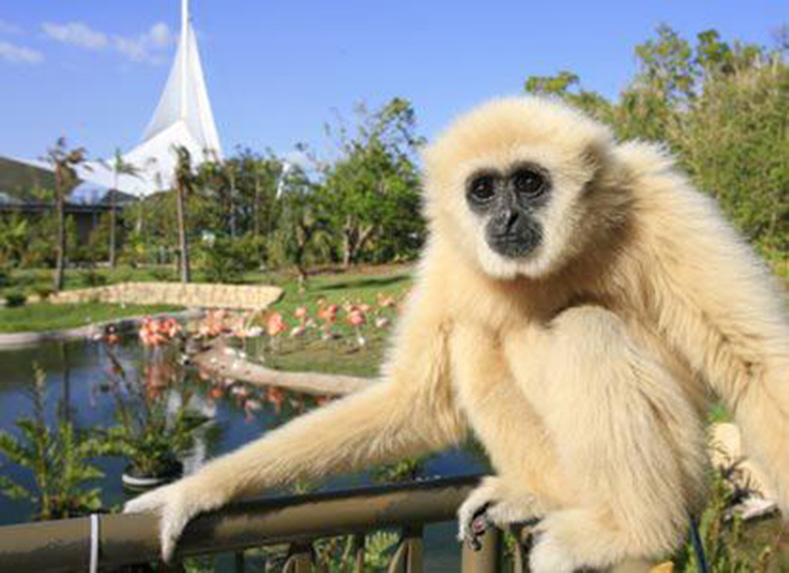 White-handed Gibbons are members of the lesser apes. They differ from great apes (chimpanzees, gorillas, orangutans, bonobo, and humans) in their smaller size, being pair-bonded, not making nests, and in certain anatomical traits in which they superficially more closely resemble monkeys than the great apes do. Their long arms allow them to swing from branch to branch for distances of up to 50 feet and at speeds of 35 mph.

Their habitat is the tropical and subtropical rainforests from northeast India to Indonesia and north to southern China, including the islands of Sumatra, Borneo and Java. Gibbons are social animals. Strongly territorial, gibbons defend their boundaries with vigorous visual and vocal displays. When the male child becomes mature, the father will run the child off the territory. If it is a female gibbon the mother will be the one to run it off. The vocal aspect, which can often be heard from far distances, comprise of a duet between a mated pair. Gibbon species include the Siamang, Hoolock, and the White-handed or Lar Gibbons that reside on Jungle Island. 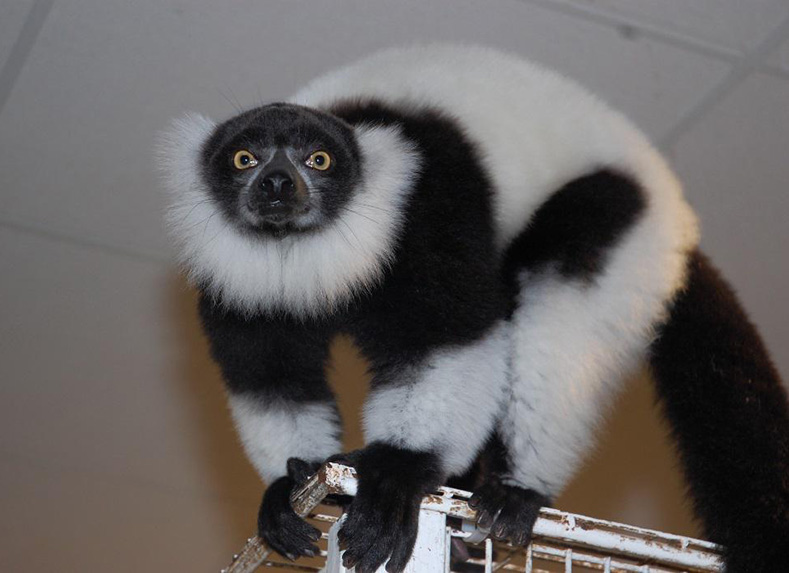 Lemurs are a special group of primates found only on Madagascar. Madagascar is an island off the coast of Africa, the climate of Madagascar is tropical, with a rainy season lasting from December until April and a dry season from May to November. Lemurs are prosimians or primitive primates. These primates have scent glands on their bottoms and on their feet that leave odors on surfaces they cross.

Lemurs use their sense of smell to communicate with each other. Their life span in the wild is approximately 32- 36 years for the Black and White and Red Ruffed lemurs. The Ruffed lemurs are predominantly frugivorous, (animals that eat mainly fruit), in fact the most frugivorous of all the lemurs. Feeding time is spent between 75-90% on fruit and the rest on a small amount of leaves and flowers. The Ruffed lemurs are diurnal, inhabiting both the ground (terrestrial) and the trees (arboreal), and form troops of up to 25 individuals. Social hierarchies are determined by sex.

Females have a distinct hierarchy but males have a non-linear hierarchy with occasional to frequent rank reversals; females socially dominate males in all circumstances, including feeding priority. Most lemurs are listed as endangered or threatened species. Many species have gone extinct in the last centuries, mainly due to habitat destruction. 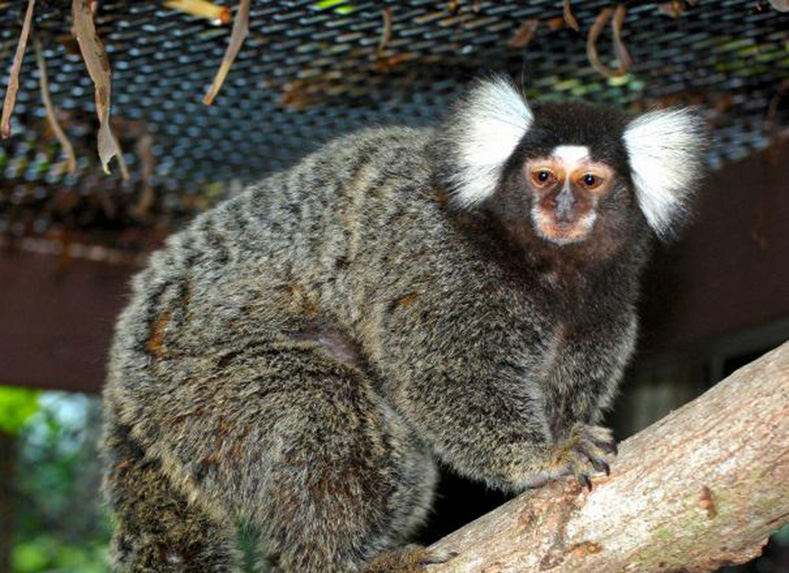 The Common Marmoset, or Cotton Eared Marmoset, lives primarily in the tropical forests of Brazil, and only reaches between 7 and 8 inches in height, and a hefty half-pound in weight. As such, Marmosets are the smallest monkeys in the world. Their diet consists of small insects, spiders and tree sap or gum.

Large birds of prey are the greatest threat to the Common Marmoset, however, snakes and wild cats also pose a danger to them. Fortunately, the Common Marmoset is not currently considered an endangered or threatened species and in fact has increased its range and reaches as far south as Rio de Janeiro. Marmosets live in family groups of 3 to 15, consisting of one to two females, an unrelated male, and their offspring. Enjoy our small bundles of energy, but remember, they are on a special diet so please, do not feed them! 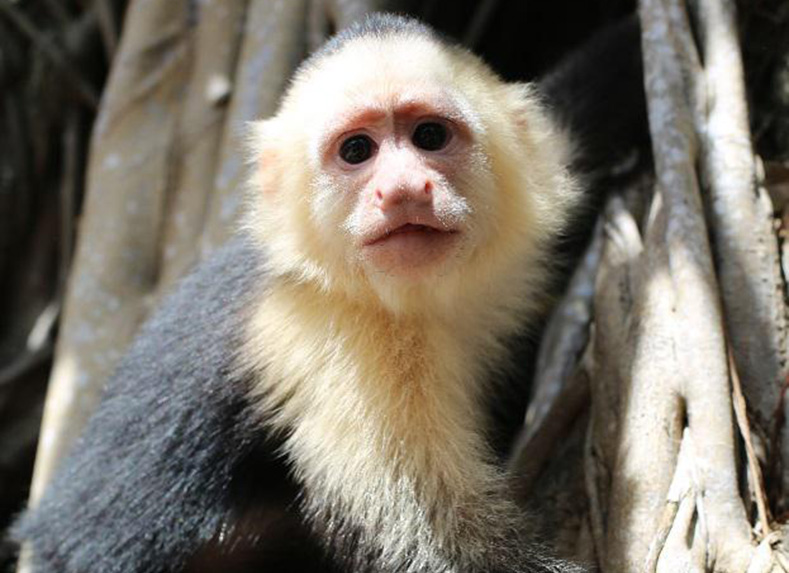 White-faced Capuchins are small primates that are found in the forests of Central and South America. They are troop animals meaning that they live in groups of twenty or more, made up of mostly females. They are diurnal and arboreal animals; highly active, most of their time is spent searching for food.

White-throated Capuchins are characterized as being vociferous; loud calls are used to communicate threat warnings, with softer calls used in intimate discourse. Facial expressions and scent are also important to communication, with urine being a primary "perfume". 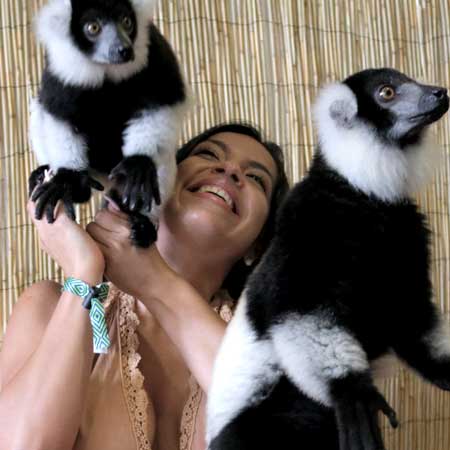 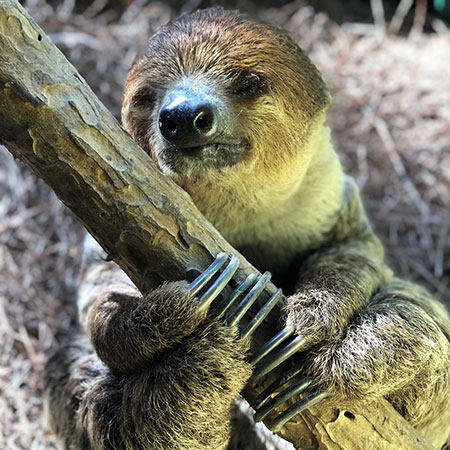 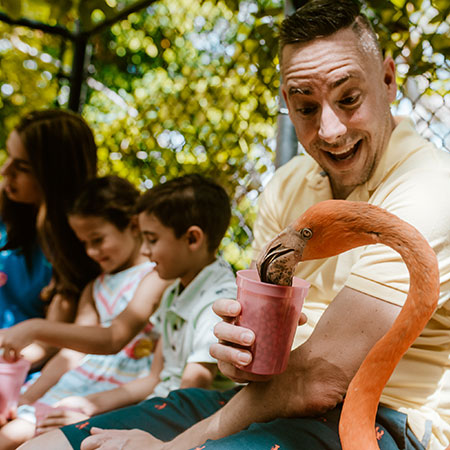